Recognizing When You Are in Self-Protection

Self-Leadership is about showing up as your best self and making decisions from this place versus reacting in self-protective behavior!

Self-Leadership is a skill that can be learned, like any other skill. And when Self-Leadership is your internal habit, you become a fully empowered leader able to actively choose a response in the present moment that will serve both the short term and the long term of your business goals. When you build a team of individuals who have all developed the skill of Self-Leadership, you will have an amazing edge.

Let’s take a closer look at what happens within you and your business when you’re in self-protection mode. That way, you’ll be aware when it’s happening, and you’ll be able to take action to shift yourself out of it!

It all begins with learning to recognize when you’re in self-protection. Without awareness, you cannot make change. Self-protection—the fight, flight, freeze, or please response— served us well when we were cave dwellers, under constant threat from the elements, wild animals, or invading warrior tribes. Today, the irony is that in modern scenarios these responses not only don’t protect us, but they’re counterproductive, creating all kinds of problems in business and personal relationships.

Behavioral scientists explain that these reactive behaviors are not adapted to modern-day human life, in which we encounter very few immediate threats, unlike our ancestors who encountered many. Instead, in today’s society, we are continuously challenged with psychological stresses that involve anticipating the farther-away future. Humans living in wealthy industrialized nations rarely worry about starvation; instead, they worry about paying taxes, getting promoted at work, sending kids to college, et cetera. Our world has so many psychological threats that it’s impossible to avoid ever going into self-protection. Frankly, it’s a miracle we don’t spend all our time in self-protection!

However, to perform well, we must spend as little time as possible in self-protection, and this is why it’s incredibly important to recognize those behaviors in ourselves and others. So what do those thoughts and behaviors look like? There are way too many to list, but some of the most common include avoiding, hiding, blaming, judging, rationalizing, and being paralyzed in the face of overwhelm. You can see the downward spiral illustrated vividly in the graphic below. I call it the “lower spiral” because it’s the lower half of a whole model, and when you’re down there, you can easily get swept down the proverbial drain! Your best thinking is not available when you are operating from this destructive lower spiral. I constantly remind the CEOs and leaders who work with me that “Nothing good happens in self-protection!”

But of course, we all become emotionally reactive at one time or another. I usually recognize when I’m in self-protection because I feel an almost uncontrollable urge to say or do something immediately. My heart rate speeds up, my cheeks get hot, and I can’t sit still. Most people can relate to that type of discomfort. Here’s an example: Imagine you are in an important meeting and a teammate questions the progress of a big project you are leading. They express “concern” that it’s not further along, phrasing it in a way that implies your performance is lacking. Let’s add one more stressful element: The CEO is in the meeting too!

What happens at that moment? With a flush of embarrassment and your heart racing, a self-protective reaction usually plays out: You might defend yourself and go into explaining every aspect of what you are doing and show why the other perspective is wrong. This leads to a debate with the other team member, where you both engage in blaming, rationalizing, and defending, causing the meeting to totally veer off course. Now neither of you looks good, valuable time has been wasted, and your CEO is losing confidence and questioning the team’s ability to resolve issues productively. You leave the meeting feeling unappreciated, misunderstood, and without having made any progress on the project. Plus, you now believe that others perceive you poorly. 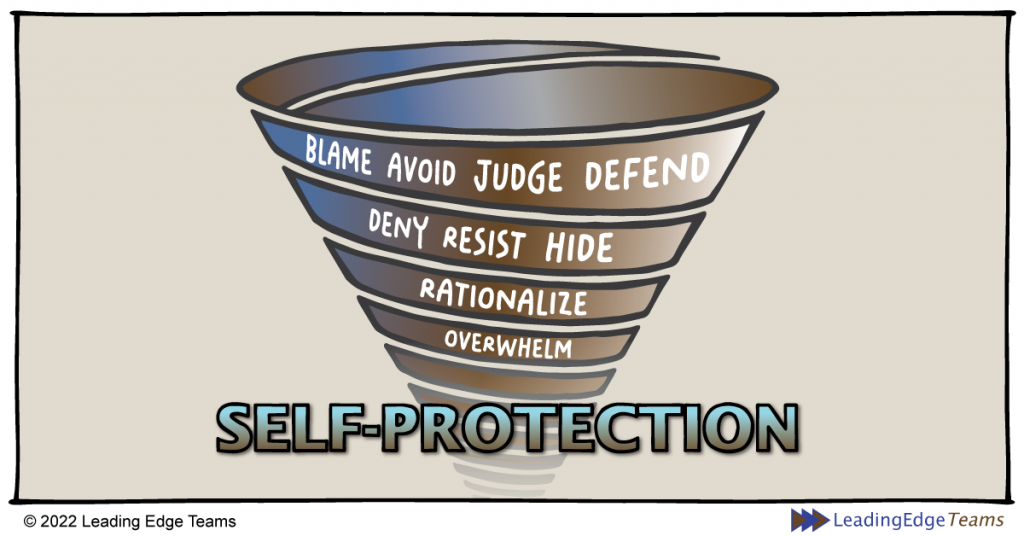 Blaming, defending, and rationalizing were the main offenders in this example, but there’s a whole slew of self-protective behaviors that crop up whether people are high-level leaders or individual contributors. Here are some of the most common.

Again, it is totally normal as a human to go into self-protection, but in business and when working on a team, your best thinking is not available when you are in self-protection. Becoming aware of it is the first step to making a change.

To learn more about self-protection and the steps to take to help you move into Self-Leadership, pre-order a copy of my soon to be released book The People Part: Seven Agreements Entrepreneurs and Leaders Make to Build Teams, Accelerate Growth, and Banish Burnout for Good.

The People Part is a comprehensive tool kit for how to work effectively with your people, with workable solutions for CEOs, business leaders, and team members. It will teach you the competencies that you (almost certainly) don’t yet have (and didn’t know you needed). 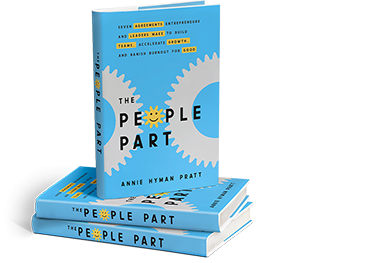 Advanced Praise for The People Part: “Annie’s approach to managing people has transformed our business here at Hay House and my life as CEO. Let her help you and your business too.” — Reid Tracy, CEO of Hay House, Inc.

You can pre-order it here:

This book is for you if… 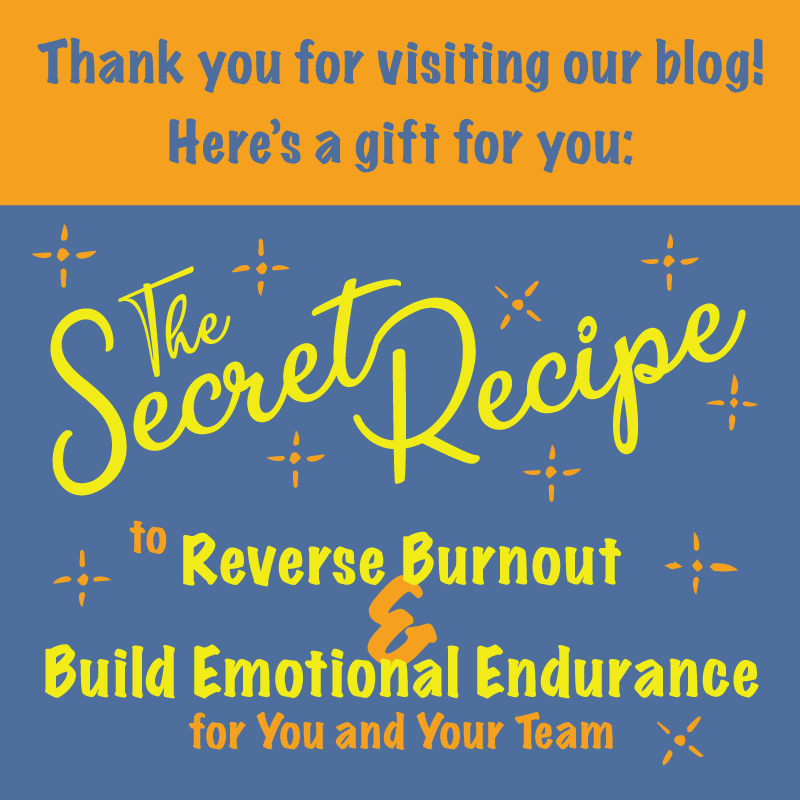 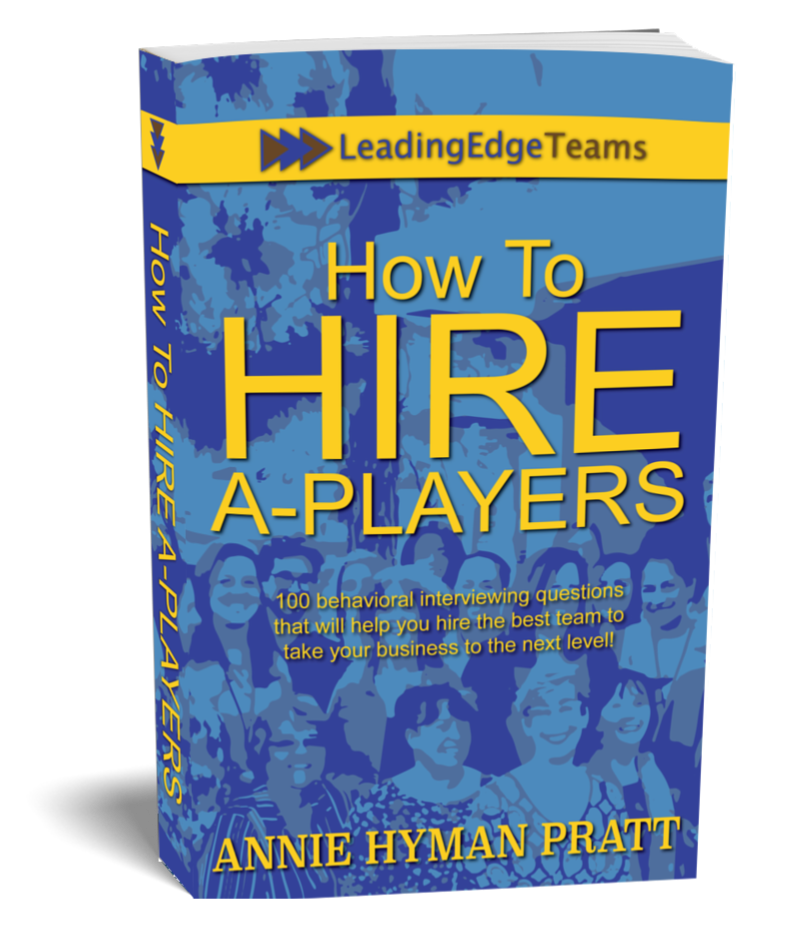 How to Hire A-Players

100 behavioral interviewing questions that will help you hire the best!

You have Successfully Subscribed! 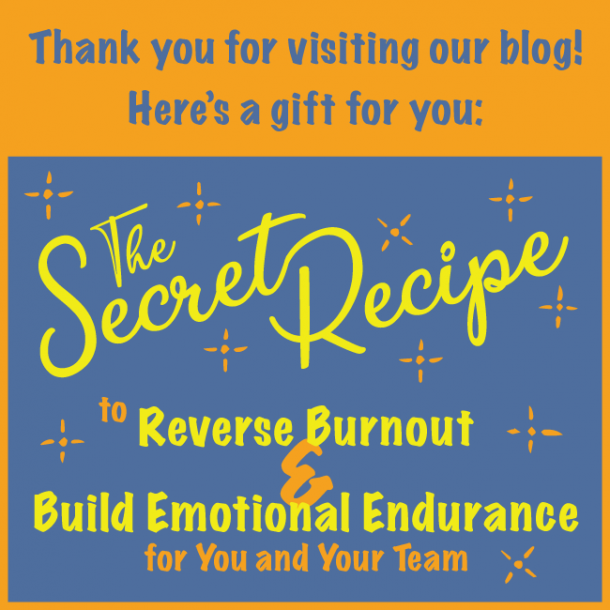 My Gift to You!

In this powerful recipe, Annie Hyman Pratt teaches you the 5 essential ingredients that every Entrepreneur, CEO and Business Leader needs to build their High-Performing Team. Keep this handy!

You're Gift is on it's way!

Burnout is REAL! This time tested, step-by-step leadership recipe will help you reverse it and create sustainable success...